The Jarring Truth about Anniversaries


Today was one of those days when I recalled that, actually, I have a degree in graphic design. (You'd think it would happen more often, but no, it really doesn't.)

Anyway. So today also happened to be one of those 'looks like it's going to be a good day and then slowly goes downhill' kind of days.

You see, it's our sixth anniversary. Now, I don't know about you, but when you've been married for six years, I feel like it becomes a liiiiiitle bit less exciting each year. For example - after one year, it was like, 'OMIGOD WE'VE BEEN MARRIED FOR A WHOLE YEAR!' Then two was like, 'whooooaaaa, two years.' And then it became three, and four...and five...and then slowly you get to the 'oh crap, do I really have to go spend money on a present? And do we really have to go OUT and DO something? Can't we just sit in front of the TV all night?' stage.

(Also, if you've been paying attention to this here blog, you may have noticed that I really dislike wasting things, and I dislike clutter, and I dislike commercialism and I REALLY dislike buying things for the sake of buying things - all of which add up to not a very good combination with the need to buy a six year anniversary gift.)

Which brings us to this morning. (Forgive me if I digress, there *will* be a recipe at the end, I promise.) I went out to the local shopping mall, on a hunt for a gift which is either iron, or wood, or sugar.

After discovering that the Gifts for Men store which had been around since the Jurassic Age was gone, I was hope-less, idea-less, and gift-less - when I came across one of those cute little "chocolate, soap, and smelly things" stands. You know, the ones where they package up things in a cute way that are solely for the purpose of giving gifts. One of those things was ALMOST a perfect gift....almost, but not quite. It was those adorable 'instant dessert' jars, which I love the idea of. Like Duncan Hines brownies, but in a jar instead of a box, and layered so you could see the ingredients, and a cookie instead of brownies. So cute!

It only had two problems:

1) It had nuts. Blech. Whoever came up with the idea of nuts in cookies should be taken out and hanged. Yuck.
2) They really didn't want to take my money. Like, seriously. First the guy wasn't at the booth, and then when he finally came back the cash register wasn't working, so he couldn't make change...basically, they were doing whatever they could to not sell to me.

So I came home, and I did it myself.

I took a Smitten Kitchen brownie recipe, because I trust her and because it had cocoa in it, which looks nice in a jar with layers. Then I measured out the ingredients into cups, slowly emptied each cup into my jar, closed it, and designed a cute label out of recycled paper.

Now, I cannot guarantee this recipe is going to work, because I did something slightly stupid and didn't read ahead to the part where you melt the butter and add some of the ingredients to the butter but not the others. I'm not quite sure how that's going to work. But it's a gift, it looks cute, it cost next to nothing, and I'll make hubby make it (maybe I'll help him. Maybe I'll wear an apron and nothing else.) (omg, did she just say that? You didn't tell me this blog was pg-13!)


It's pretty self explanatory, but here are the instructions and I'll let you know how the actual brownies turn out once he gets around to making them. 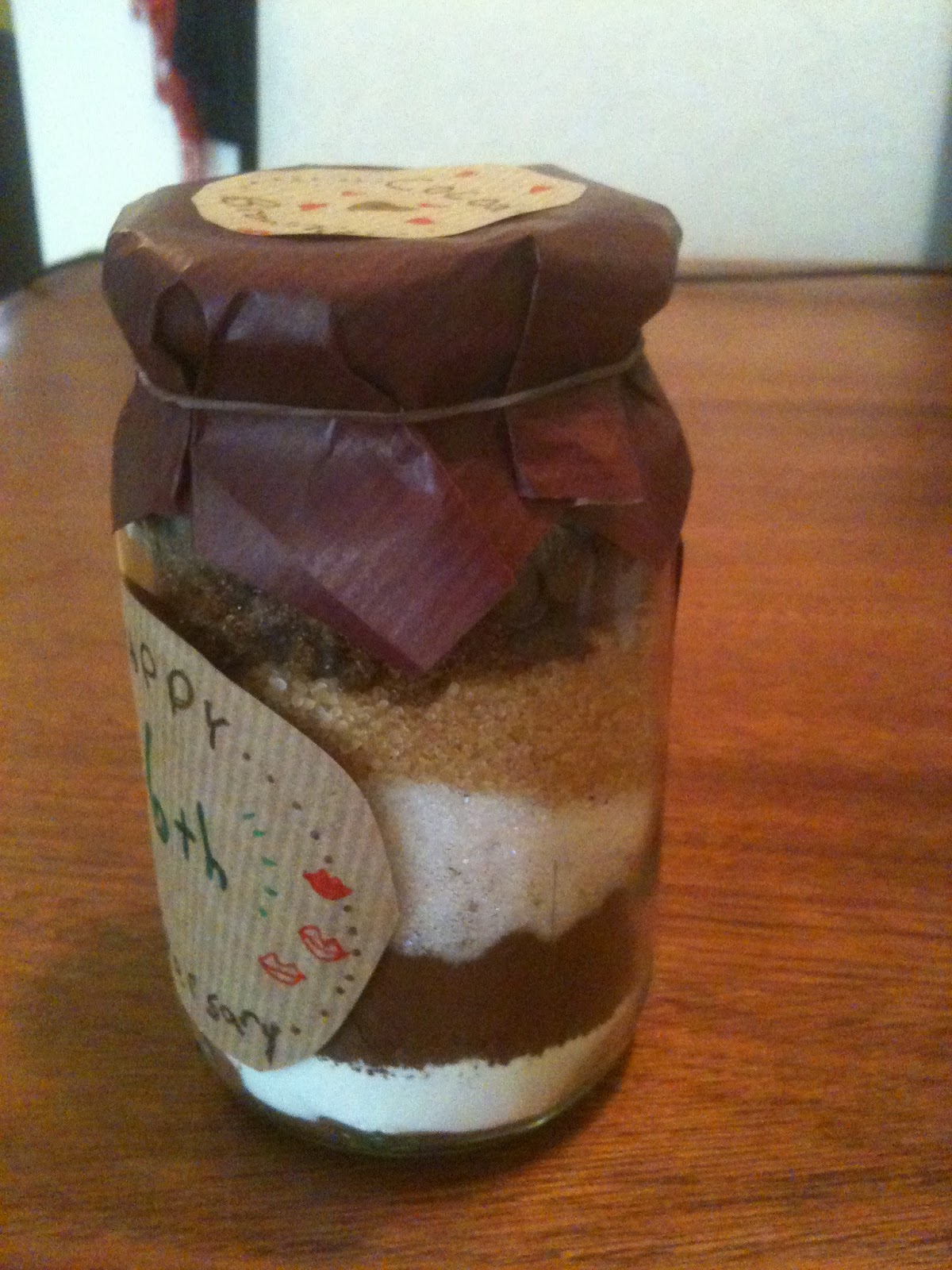 First off just a note about why things are in grams rather than cups and stuff. It's taken me years of cooking, but finally I came round. Why? For one, I was brainwashed by my other kitchen guru, Alton Brown, who convinced me that it's much more precise. For another - buying a kitchen scale is a one time investment, and then it is way easier than measuring things out in cups every time. If you don't have a kitchen scale, by all means go ahead and figure out how much half of "3/4 cup plus 2 tablespoons" is. Then y'all can let me know.

Second, the recipe calls for 125 grams sugar. I divided that somewhat willy nilly with the three different kinds of sugar I had at home. You don't have to do that, but it sure looks pretty.