On Food, Sociology, and Green Beans in Olive Oil

This blogger just got back from a vacation in America land, and, maybe for the first time, I get it. A little. Not entirely, but I get it now.

See, we were sojourning in the South, and there were three really noticeable things:

1) it was HOT!
2) it was poor;
And this one is probably not unique to the South, but to North America as a whole
3) food is convenient!

So, I get it a little bit more now. I get it how only crazy people would make their own crackers. Am I nuts? Why on earth would one make crackers when getting crackers from the store is so darned cheap, convenient, and easy? Let's not forget tasty. All the fast foods and all the instant foods and all the store bought foods are so good at adding taste enhancers beginning in e- and ending in 103. How can homemade food compete with that?

So I get it. I get how making your own blah from scratch is totally a White Privilege thing. I get how it fits in with the whole kale-munching, Whole-Foods-shopping, home-schooling, organics-eating, fermenting-thing. I'm not going to get into the factors behind that demographic because a) that's not me, and b) I'm not a sociologist.

However, I live in Israel, where convenient food isn't so convenient or cheap, whereas fresh fruits and vegetables are. So I don't bake my own bread because I want it gluten free, I bake it because it's cheaper that way. I make my own jam and ferment vegetables because otherwise the food will go bad and my ancestors died in the Holocaust therefore I can never throw food out. (Just...don't ask me about actually eating the fermented foods. They keep forever, right?) I get a box of organic veggies because I'm lazy and we don't have a car and this just shows up on our door like magic.

I'm not a hipster! I swear! (Oh, and also I don't have 5 kids and/or a full time job, and that also helps me have time to, you know, make yogurt from scratch and all.)

So after these realizations, and after this vacation, I've finally learned to take it easy on myself. A bit. Both because convenience is so darned convenient, and because it's seriously too hot to cook these days. It's so hot it's all we can do to eat Popsicles for dinner. If we cut up a tomato we have made an Herculean effort.

But this isn't just a 'listen to me philosophize about food and sociology' blog, it's also a food blog, so  I'm going to give you a recipe that I did actually manage to cook this week (plus it gets cooked in a closed pot so it doesn't heat up your kitchen.) It finishes up ingredients that one gets in a CSA got that I find hard to finish otherwise; it's delicious in this blogger's humble opinion; and it's even seasonal if you are Jewish and starting to wrack your brain about simanim-type foods to make for Rosh Hashana. 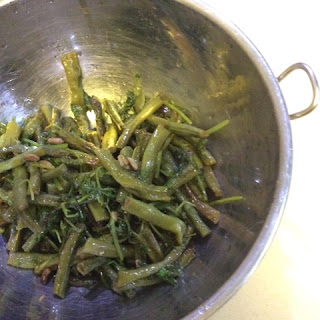 To make it a meal: buy pita. Buy hummus. (Or maybe pbj if you're in America? I dunno. What goes with pita in America that isn't hard cheese?) Slice a tomato or if you're feeling REALLY ambitious, make an Israeli salad. Make this dish. Dinner. Done.

P.S. This was like the only thing I cooked this week. Otherwise dinner was store-bought bread and butter and jam. Cuz it's hot. And cuz, like I said, I get it now.
Posted by Babka at 9:40 AM